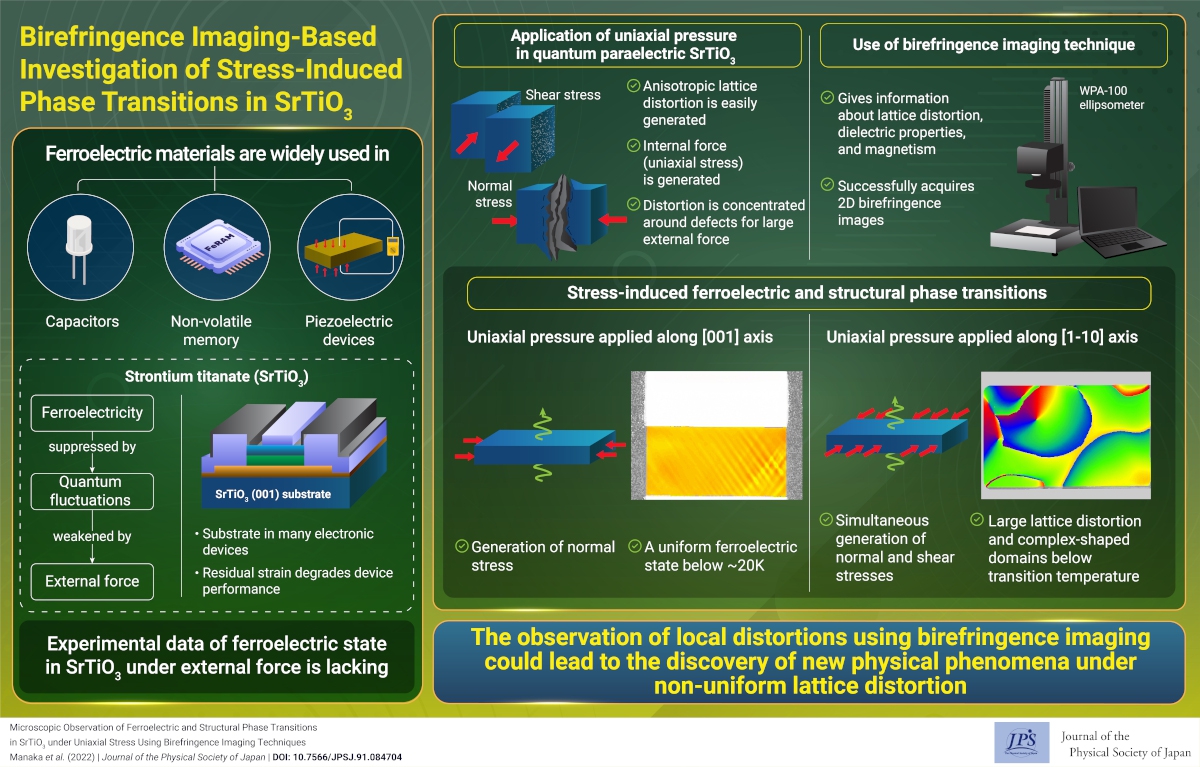 Ferroelectric materials are widely used as capacitors that can store a large electric charge as well as non-volatile memory (FeRAM), piezoelectric devices, and actuators. In strontium titanate (SrTiO3), ferroelectricity is suppressed by quantum fluctuations, resulting in quantum paraelectricity below the structural phase transition temperature (Tc = 105 K). Furthermore, it has been demonstrated that applying an external force weakens quantum fluctuation, resulting in the appearance of the ferroelectric state. There are two methods for applying an external force (pressure) to crystals. In the case of hydrostatic pressure, the external force causes isotropic compression in the crystals and almost uniform lattice distortion. However, in the case of uniaxial pressure, anisotropic lattice distortion that cannot be achieved by hydrostatic pressure is easily generated when an external force is applied in a specific direction. By applying uniaxial pressure, an internal force is generated in the crystals based on the laws of action and reaction. This internal force is generally called “(uniaxial) stress”. When the external force is large, lattice distortion is concentrated around the defects owing to the increase in dislocations. To quantitatively evaluate such non-uniform lattice distortions, a new experimental technique is expected to be developed.

Birefringence is well known to be responsible for the phenomenon of double refraction, which occurs when a ray of light passes through calcite. The difference in refractive indices causes retardation, which provides information about lattice distortion, dielectric properties, and magnetism. Therefore, birefringence measurements have been widely used for many years. However, evaluating the non-uniform state has been difficult because conventional measurements using a laser beam can observe it at only one point. To solve this issue, the authors were able to obtain two-dimensional birefringence images under an external force.

In this study, when an external force was applied along [001] in quantum paraelectric SrTiO3, the ferroelectric state induced by normal stress appeared almost uniformly below 20 K. However, when an external force was applied along [1-10], a large lattice distortion that was impossible to attain was generated, and complex-shaped domains emerged below Tc owing to the simultaneous generation of the normal and shear stresses. Although the temperature dependence of retardance in each domain was investigated, the ferroelectric state could not be observed. This could be because, under our experimental conditions, the degree of lattice distortion never reached a critical value without breaking the crystal. If the birefringence can be efficiently mined from large amounts of image data by using statistics and AI, there is a possibility that new physical phenomena will be discovered under non-uniform lattice distortion.

(Written by H. Manaka on behalf of all authors).

Dielectric, optical, and other properties in condensed matter