A semiconducting carbon nanotube doped with an optimal concentration of nitrogen delivered a thermoelectric power substantially higher than that delivered by commercial Bi2Te3 alloys. 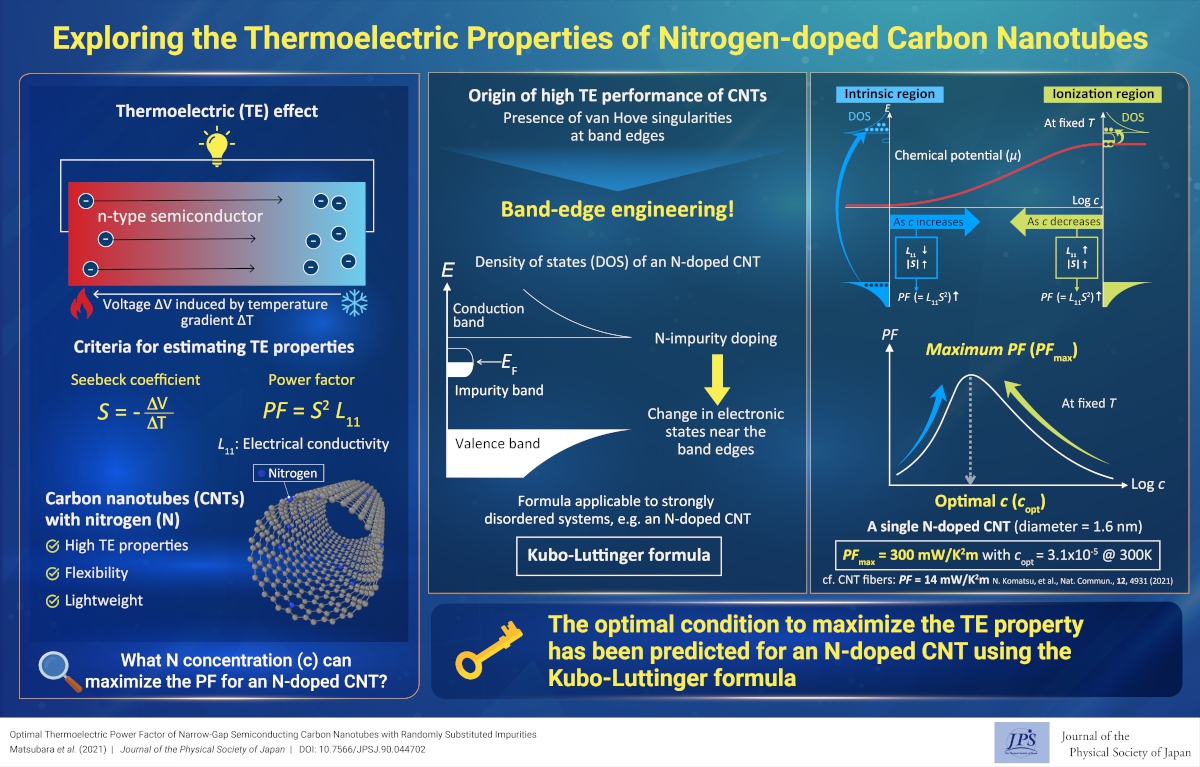 Thomas Johann Seebeck discovered the thermoelectric (TE) conversion from heat to electrical energy just 200 years ago. Recently, high-performance TE materials have attracted research interest as energy-harvesting technologies. Most of the experimentally discovered TE materials are impurity-doped semiconductors i.e., disordered systems. High-TE effects are expected near the band edge in the impurity-doped semiconductors, where the electronic states are under the influence of strong impurity scattering not properly treated by the conventional Boltzmann transport theory (BTT). Therefore, it is necessary to develop a sophisticated theory beyond BTT. Recently, the authors (T.Y. and H.F.) have alleviated this drawback using the linear response theory (Kubo–Luttinger formula) in conjunction with the thermal Green's function technique [1–3].

The TE linear response theory was successfully applied to nitrogen-doped semiconducting carbon nanotubes (N-CNTs) in the present study. The N-CNTs functioned as lightweight, flexible, and high-performance TE materials. The power factor, PF (=L11S2), was dependent on the nitrogen concentration, c (up to 10-2), per unit cell of a CNT at various temperatures. The electrical conductivity and Seebeck coefficient were designated as L11 and S, respectively. The PF increased with a decrease in c at 300 K. When c decreased to less than the optimal impurity concentration, copt (= 3.1×10-5), the PF started to decrease. This behavior was explained based on L11 and S, considering the c-dependence of the chemical potential, μ. The μ at c = 10-3 located below the donor level formed via nitrogen doping, and the electrons were thermally excited from the donor level to conduction band. The μ level shifted downward with a decrease in c owing to a decrease in the net carrier density of the N-CNTs. Here, |S| increased with a decrease in c. A decrease in c, corresponding to a decrease in the rate of scattering by the impurities, was accompanied by an increase in L11 owing to the electrons in the conduction band. Consequently, the PF increased with a decrease in c. A further lowering of c promoted the asymptotic approach of μ toward the center of the band gap owing to the thermally excited holes. The holes contributed to an increase in L11; however, |S| decreased rapidly because the hole contribution to S cancels out the electron contribution to S. Therefore, the PF started to decrease below copt. These results facilitated successful estimation of the optimal nitrogen concentration to maximize the PF at various temperatures. A PF of 0.30 W/K2m was obtained for copt at 300 K, which is significantly higher than the PF of commercial Bi2Te3 alloys. These theoretical predictions will facilitate the development of new materials with optimal TE performances.

(written by M. Matsubara on behalf of all authors)