Based on the Kubo–Luttinger linear response theory, we discovered that the low-T Seebeck coefficient for Mott variable-range hopping in a d-dimensional system varies as S ∝ Td/(d+1), which is different from the conventional S ∝ T(d−1)/(d+1). In addition, the experimental data for S of CuCrTiS4 at low T are in excellent agreement with our prediction S ∝ T3/4 (d = 3). 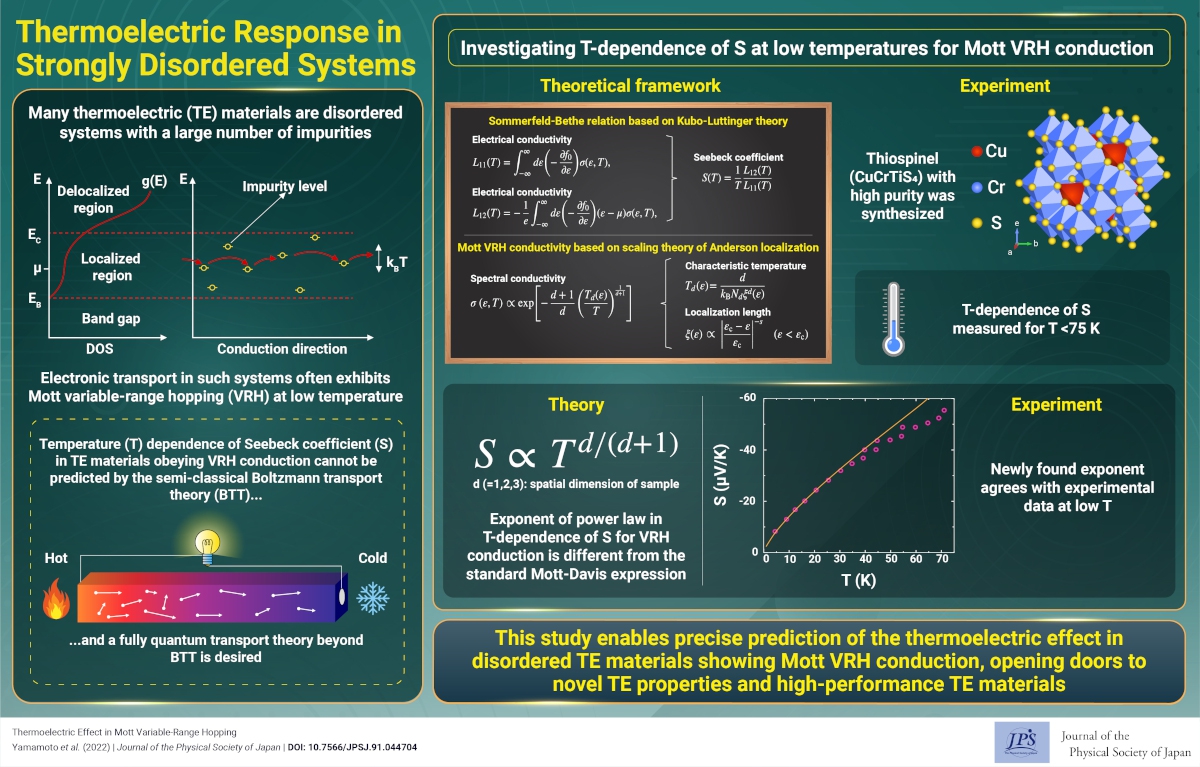 In 1957, Kubo established the linear response theory to kinetic perturbation (e.g., electric or magnetic field). In the following years, based on the combination of the thermal Green's function technique with the Kubo formula, the linear response theory has emerged as a powerful practical tool for analyzing quantum transport and the magnetic response of materials. In contrast, the linear response theory to thermodynamic perturbation (e.g., temperature gradient) was advocated by Luttinger in 1964. Luttinger succeeded in treating the temperature gradient as a kinetic perturbation by introducing a fictitious gravitational field (scalar field). Since 2018, the authors and their co-workers have been developing the Luttinger formula together with the thermal Green's function technique to determine the thermal response (i.e., thermoelectric (TE) effect and thermal transport) of materials from a quantum mechanical perspective. The developed technique has been successfully applied to various materials exhibiting interesting TE effects that cannot be explained in terms of the Boltzmann transport theory (BTT).

In this study, as a typical thermal response beyond the BTT framework, the authors investigated the TE response in Mott variable-range hopping (VRH) using the above-mentioned Kubo–Luttinger (KL) theory together with the thermal Green's function technique. By incorporating the energy dependence of the localization length near the mobility edge based on the scaling theory of Anderson localization, we clarified that the Seebeck coefficient S(T) varies according to S ∝ Td/(d+1) in a d-dimensional system, which is different from the widely used Mott–Davis expression, S ∝ T(d−1)/(d+1), based on the energy-independent localization length. In addition, we demonstrated that the low-T behavior of S(T) for thiospinel CuCrTiS4, which is known as a typical TE material exhibiting Mott VRH at low T, is in complete agreement with our theoretical prediction S ∝ T3/4 (d = 3).

This study enables precise prediction of the performance of disordered TE materials exhibiting Mott VRH. The development of such a complete quantum theory that precisely predicts TE properties will play a role in realizing a sustainable society.

(Written by T. Yamamoto on behalf of all the authors.)