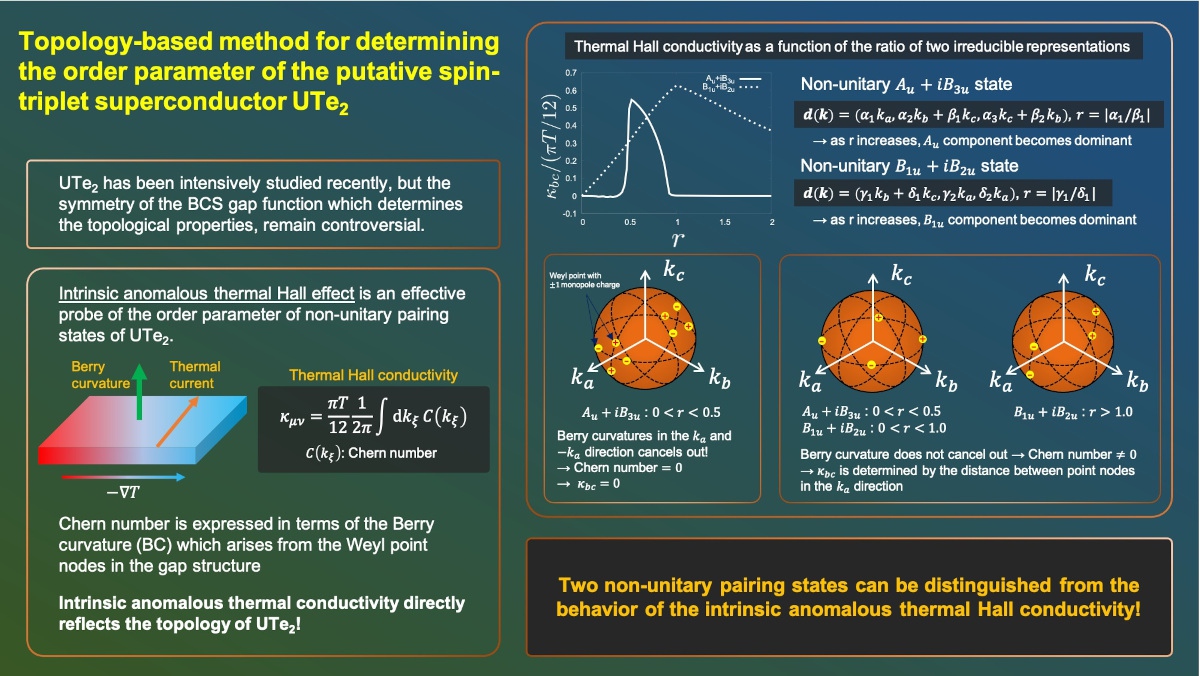 Recently, the actinide compound UTe2 has been intensively studied as a novel candidate material for a spin-triplet superconductor, which is expected to host Majorana particles utilized for quantum computation. The superconductivity of this material without a magnetic order renders it ideal for research on pure spin-triplet superconductors. The possibility of a non-unitary pairing state in UTe2 is also discussed, indicating that UTe2 is a Weyl superconductor that has topologically protected point nodes with monopole charges in the superconducting gap. However, the symmetry and gap structures, which determine its topological properties, remain controversial. Therefore, an effective method for probing the order parameter of UTe2 is lacking.

In this study, the intrinsic anomalous thermal Hall effect, which is a fundamental property of Weyl superconductors, is investigated. The pairing state in the spin-triplet superconductor is characterized by a three-dimensional odd-parity order parameter, referred to as a d-vector. The basis of the d-vector corresponds to the irreducible representations (IRs) of the D2h point group. When symmetry is reduced by the application of an external field, the admixture of these IRs is formed, which results in non-unitary pairing. We calculate the thermal Hall conductivity for the possible non-unitary pairing states in UTe2 as a function of the ratio “r” of the amplitudes of two mixed IRs. The intrinsic anomalous thermal Hall conductivity can be obtained by the integration of the Chern number, which corresponds to an integration of the Berry curvature over the Brillouin zone. Since the Berry curvature arises from the Weyl point nodes with monopole charges, the intrinsic thermal Hall conductivity directly reflects the distribution of the point nodes on the Fermi surfaces.

The relationship between the Hall conductivity and the point node structure is evident in the case of a simple ellipsoid-shaped Fermi surface, which is the minimum model that reflects the orthorhombic crystal structure. The admixture of IRs causes a splitting of the point nodes, because of which they move away from the high-symmetry axis. When one point node splits into two, the split nodes become Weyl points that have monopole charges with opposite signs. In this case, a Berry curvature exists along a certain direction, with a finite Chern number. This results in a finite thermal Hall conductivity, the magnitude of which depends on the distance between the point nodes.

The change in the point node structure due to the admixture of the two IRs is unique for each d-vector and is useful for the distinction of the order parameters based on future thermal conductivity measurements.

(Written by Y. Moriya on behalf of all the authors.)