We propose that spin current in an organic conductor, α-(BETS)2I3, is an appropriate physical quantity to detect the topological nature of the material whose electrons obey a quasi-two-dimensional Dirac equation. 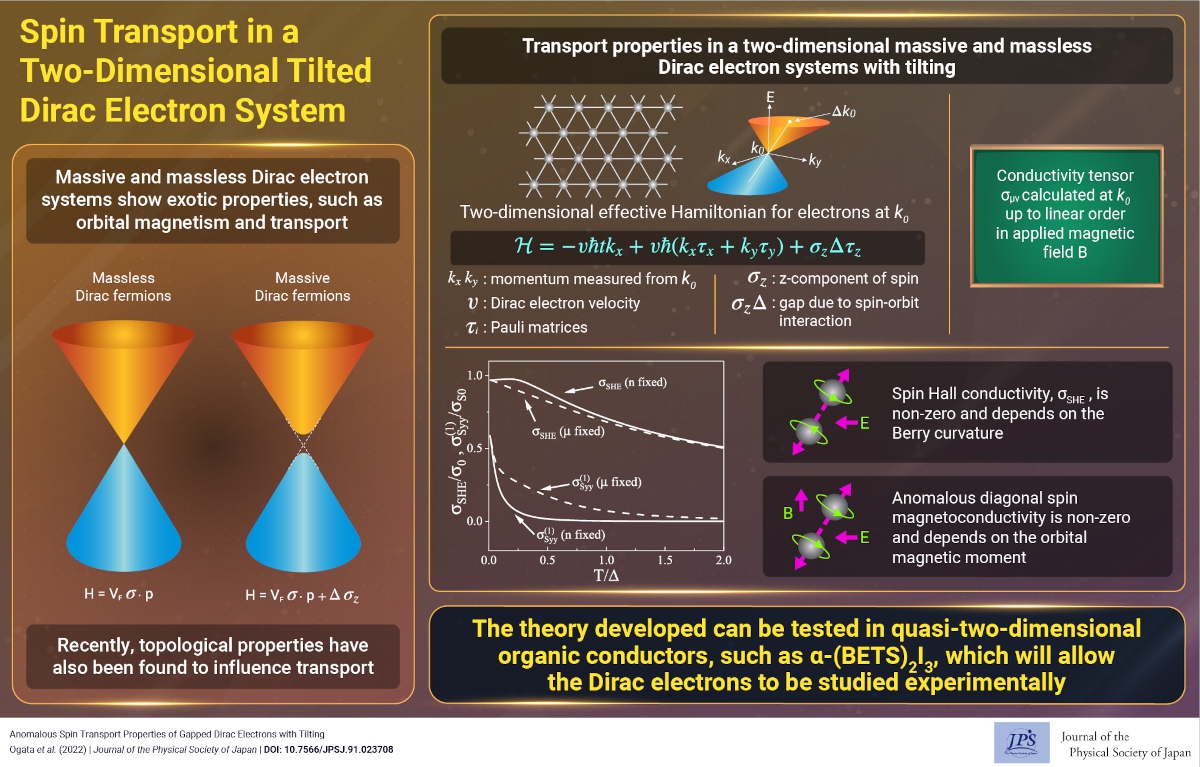 In quantum mechanics, electrons are described by wave forms, and thus, their wave functions are characterized by wave numbers in the Fourier space. Recently, the topological nature of the wave functions in the Fourier space (that is, momentum space) has been confirmed to provide various peculiar properties to materials, which are called “topological materials.” However, extracting the topological nature as an observable quantity in a bulk material is difficult. In this paper, we propose that spin current in an organic conductor is an appropriate physical quantity to detect the topological property of the material.

The organic conductors considered in this study are layered materials composed of relatively large molecules, and the electrons can move around hopping on various molecules forming a quasi-two-dimensional electron system. Material parameters such as the lattice constant, kinetic energy of electrons, and interaction between particles can be rather easily controlled by pressure or by substituting molecules with slightly different molecules. Consequently, organic conductors demonstrate various interesting properties as shown in a wide variety of phase diagrams of parameters. Recently, related to the topological nature, a certain class of organic conductors whose electrons obey the quasi-two-dimensional Dirac equation has been focused on. The Dirac equation was proposed by Dirac in 1928, which combined the newly born field of quantum mechanics and relativity. It predicts positrons occupying the vacuum. However, an electron–positron pair creation requires very high energy. In an organic conductor, α-(BETS)2I3, the first-principles band calculation shows that electrons inside obey an equation similar to the Dirac equation, but with a very small energy gap. Therefore, in this material, the corresponding electron–positron (called hole in solids) pair creation requires considerably less energy than that for the original electron–positron pair creation. It can be created using thermal energy even at room temperatures.

Theoretically, the two-dimensional Dirac electrons have been shown to have very peculiar topological properties. However, the conventional physical quantities are often written as an integral over the momentum space. Consequently, the topological nature of the Dirac electrons represented by Berry curvature vanishes after integration because the Berry curvature has two opposite-sign contributions at the two distinct Dirac points in the momentum space. In this study, we noticed that this cancellation can be avoided by considering spin current, and the topological nature of the Dirac electrons in α-(BETS)2I3 can be detected in the spin current that can be measured using recent experimental techniques. More explicitly, we calculated the spin Hall conductivity and spin conductivity in a magnetic field based on a linear response theory.

(written by Masao Ogata on behalf of all authors)