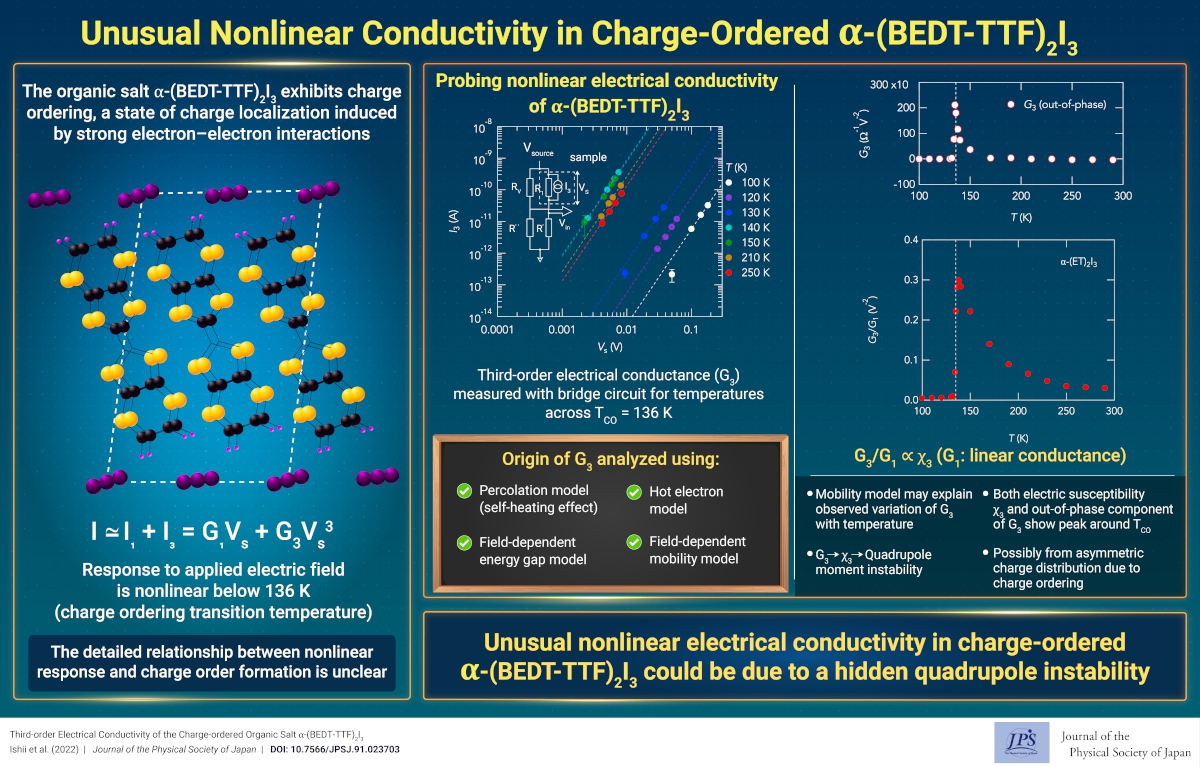 When voltage V is applied to the sample, electrical current I proportional to the voltage flows as V = R × I or I = G × V, where R and G (= 1/R) denote the resistance and conductance, respectively. This is the well-known Ohm’s law, also called as the linear conduction because of a linear relationship between current I and voltage V.

In contrast, several materials show nonlinear conduction, in which current I is not proportional to voltage V. The representatives are the nonlinear semiconductor devices such as diodes and transistors, as widely used in modern electronics. Recently, nonlinear conduction has also been observed in various correlated insulators, and it becomes a challenging issue to clarify the underlying mechanism of the nonlinearity.

A peculiar class of the organic-molecular-based compounds hosts an emergent electron crystal called “charge order,” in which the electrons are arranged periodically owing to the Coulomb repulsion. It provides a fascinating playground to study the nonlinear conduction because such a charge crystal may be highly sensitive to the external electric field as the normal crystal is affected by the external mechanical force. Indeed, organic salt α-(ET)2I3, in which the charge order emerges at TCO = 136 K, exhibits interesting nonlinear transport such as a collective sliding motion of charge order above the threshold field.

In the present study, the authors aim to examine the low-field nonlinear response of charge-ordered salt α-(ET)2I3 by a harmonic conductivity experiment. Generally, the nonlinear conduction can be expressed as a Taylor series of current I as I = G1V + G2V2 + G3V3 …, where Gi denotes the ith-order conductance. The first term on the right-hand side is the Ohmic term. In this experiment, a bridge circuit technique was utilized to accurately detect third-order conductance G3.

Although the crystal structure of molecular-based compounds appears very complicating at the first glance, it is greatly simplified by regarding the complicated molecule as a point-like charge (electric monopole). The present results indicate that the asymmetric charge distribution in the molecule unit with a higher-order quadrupole moment is essential to thoroughly understand various intriguing properties of molecular solids.

(Written by R. Okazaki on behalf of all authors)