This study reports the observation of the spin fluctuation in a quantum kagome antiferromagnet CaCu3(OH)6Cl2·0.6H2O which persists down to 82 mK using the μSR technique. 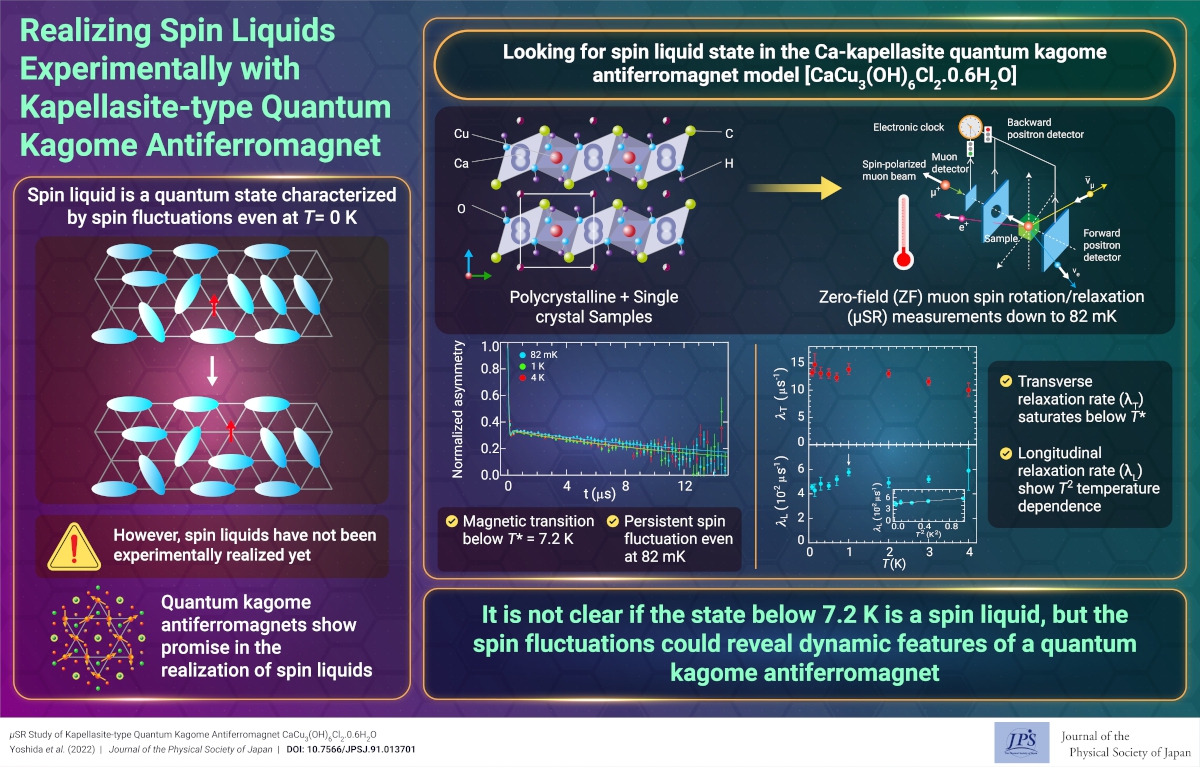 At ambient pressure, water has three states depending on the temperature; gaseous (water vapor), liquid (water), and solid (ice) states. Below 0 °C, water freezes to form ice which comprises crystals with molecules arranged periodically. Electron spins, which are responsible for the magnetism of materials, have similar thermodynamic properties. In general magnets, the paramagnetic (gaseous) state is stable at high temperatures in which the electron spins have random directions, whereas when the temperature is lowered, a phase transition occurs at a certain critical temperature to the magnetically ordered (solid) state in which the electron spins exhibit a periodical alignment. The magnetically ordered (solid) state is, for instance, a ferromagnetic state in which all the electron spins are aligned in one direction or an antiferromagnetic state in which all the neighboring spins point in opposite directions. By controlling and utilizing these magnetic states, modern electronics has progressed exponentially. Recently, the "magnetic frustration" effect, which prevents such electron spins from forming a solid state, has been actively investigated, and the realization and potential applications of the spin liquid state which is "a liquid state of electron spins" caused by the frustration effect have garnered significant interest.

The authors have focused on Ca-Kapellasite (CaCu3(OH)6Cl2·0.6H2O) as a model material for a quantum kagome antiferromagnet, which has a strong frustration and is expected to be an excellent candidate for the spin liquid state. The spin dynamics of this material has been investigated in detail down to the extremely low temperature of 82 mK through the μSR technique. It has been elucidated from the magnetization measurements that Ca-Kapellasite exhibits magnetic order at 7.2 K. Therefore, it appears to be a magnetic material that can be described by the mean-field approximation of classical spin systems. However, the proposed μSR experiments revealed that the spins were fluctuating even in the magnetically ordered state. This indicates the dynamic aspect of the magnetic state of a quantum kagome antiferromagnet. It is expected that the development of chemically modified samples and related materials, as well as precise measurements of the physical properties, will significantly advance the understanding of the physics of kagome spin liquids.

(Written by H. K. Yoshida on behalf of all authors)