Materials with Dirac Loops: A Potential Solution for Next-generation Electronics 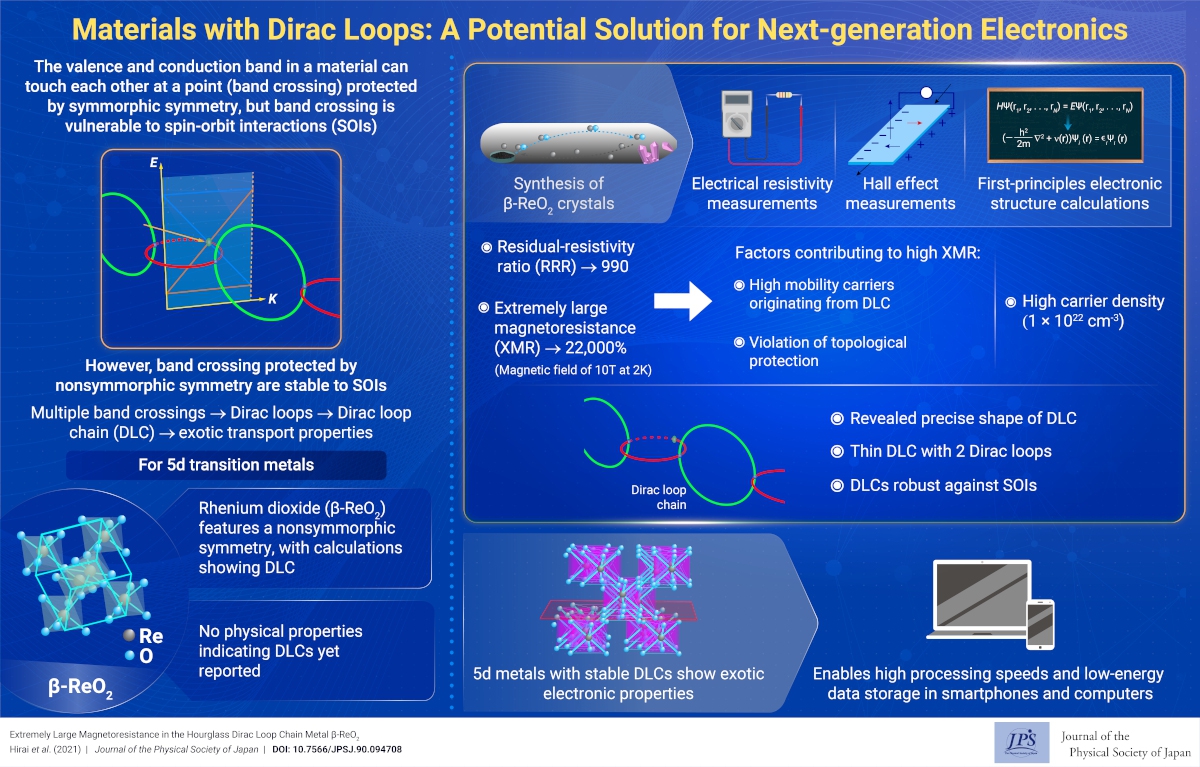 Dirac electrons, which are relativistic particles, appear when the linear bands have intersections in the band structure of solids. Materials with band intersections near the Fermi level, such as monatomic layers of graphite (graphene), have attracted much attention for their ultra-high mobility and significantly large magnetoresistance due to Dirac electrons. However, when the spin-orbit interaction is turned on, a gap opens at the band crossing point, and the properties of the Dirac electrons vanishes. Recently, Dirac electrons originating from the "hourglass" band structure, which is protected by non-symmorphic crystal symmetry, have attracted particular attention because the gap does not open, and their properties do not disappear in the presence of the spin-orbit interaction. Several candidates for materials with hourglass-shaped band structures have been proposed from theoretical studies; however, the experimental verification has been limited.

In 2017, a theoretical group in China pointed out an hourglass-shaped band dispersion near the Fermi level in ReO2, a simple rhenium oxide. They predicted that the Dirac points at the neck-crossing point of the hourglass bands draw loops (forming nodal lines); they have a special electronic structure called a "Dirac loop chain," in which two types of loops are connected like a chain. ReO2 has been known for a long time. The temperature dependence of resistivity was reported more than 50 years ago. However, the purity of the sample was not good; no experimental results suggesting the existence of Dirac electrons were obtained.

The authors grew high-quality single crystals of ReO2 by the chemical vapor transport method and observed giant magnetoresistance and quantum oscillations. From the electronic structure calculations, it was obtained that an hourglass-shaped band structure exists near the Fermi level and that the Dirac loop chain potentially causes these unusual observed.

This study show that even in transition metal compounds with large atomic numbers such as ReO2, which have strong spin-orbit coupling, the Dirac electrons originating from the hourglass-shaped band structure are not vanished; in addition, unique properties such as giant magnetoresistance appear. Further studies are expected to reveal novel properties derived from the Dirac loop chain, such as special surface states and angular dependence of transport properties. These results provide a guideline for searching new Dirac fermionic materials focusing on the non-symmorphic crystal symmetry.

(Written by D. Hirai on behalf of all authors)