Understanding the Obscure Antiferromagnetism in α-Mn by Nuclear Magnetic Resonance

Although Mn is an elementary metal, the antiferromagnetic state of α-Mn is still obscure. Our NMR study on high-quality α-Mn provides new insights into the symmetry of its antiferromagnetism. 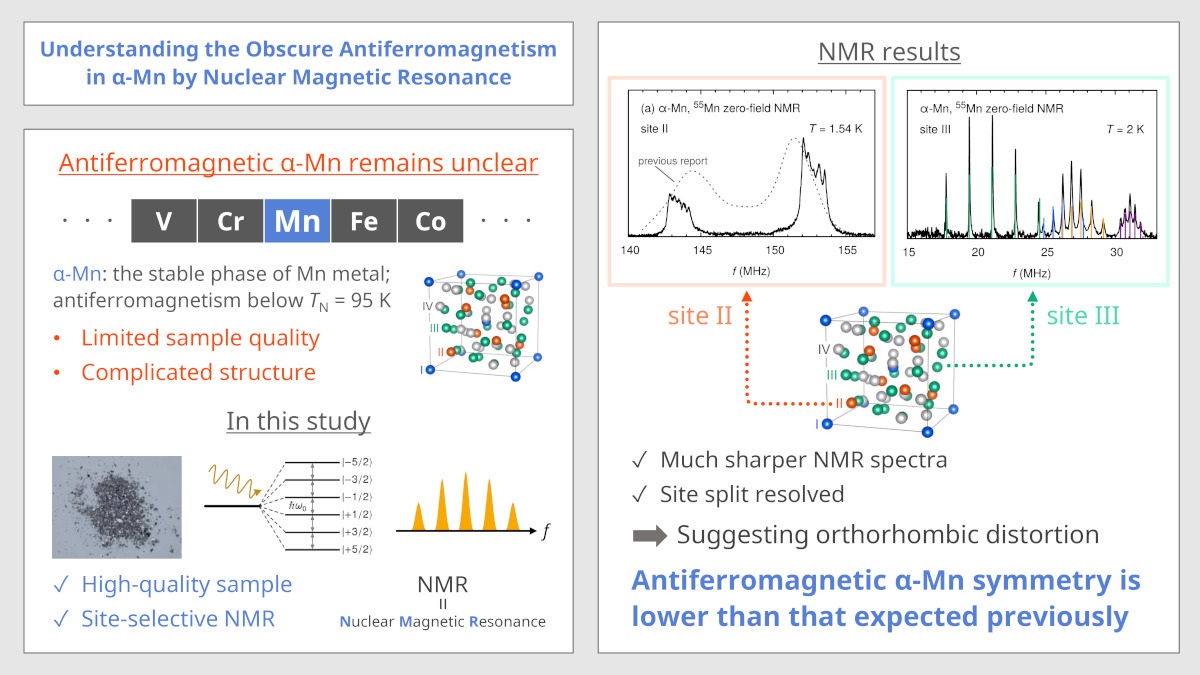 Magnetism in most elementary metals is well understood. An exception is α-Mn, the stable phase of metallic manganese at ambient temperature and pressure. This system crystallizes in a unique structure, wherein four Mn sites exist in a cubic structure with 58 atoms per unit cell. This system exhibits an antiferromagnetic ordering at a Néel temperature of TN = 95 K. In the antiferromagnetic state, all the four sites have magnetic moments. Despite active studies in the 70 years since the discovery of the antiferromagnetism in this system, knowledge regarding the symmetry and the moment directions remains insufficient. It is difficult to precisely clarify the magnetic structure because of the complexity of the crystal and the limited sample quality.

Since the discovery of the pressure-induced magnetic phase at above 1.5 GPa, the magnetism of α-Mn has received renewed attention. This phase shows a large anomalous Hall effect, which is common in ferromagnets. The anomalous Hall effect is closely related with the topological nature of the magnetic properties. The pressure-induced phase is also suppressed using pressure and shows quantum critical behavior at approximately 4.2 GPa. The elementary metal is still useful in condensed matter physics.

We measured a nuclear magnetic resonance (NMR) on a high-quality α-Mn sample and obtained a new insight into the magnetic structure. The NMR technique is a useful method for resolving the magnetic information of each site in a crystal. First, it was confirmed that site II split into two sites in the antiferromagnetic state, as previously suggested in the NMR studies. We discovered that each NMR spectrum of Mn-II site shows a fine structure owing to the titling of the magnetic moments with respect to the [001] direction. This shows the non-collinear magnetic structure and nearly parallel moments in the split site II. Furthermore, it was revealed that site III split into four sites below TN, whereas only two III sites were resolved in the previous studies. These findings suggest that α-Mn shows orthorhombic distortion in the antiferromagnetic state, as opposed to the previous expectation that α-Mn orders in the tetragonal one.

The progress in this study is largely owing to the improved sample quality. The present sample was synthesized using the Pb flux method, developed in Okayama University’s group. Further advances in identifying the magnetic structure of α-Mn in both the antiferromagnetic and pressure-induced phases are expected.

(Written by M. Manago on behalf of all the authors.)