The origin of giant rotating clusters of fish is revealed by a new agent-based model that incorporates the topological nature of interactions and the escape response characteristic to fish. 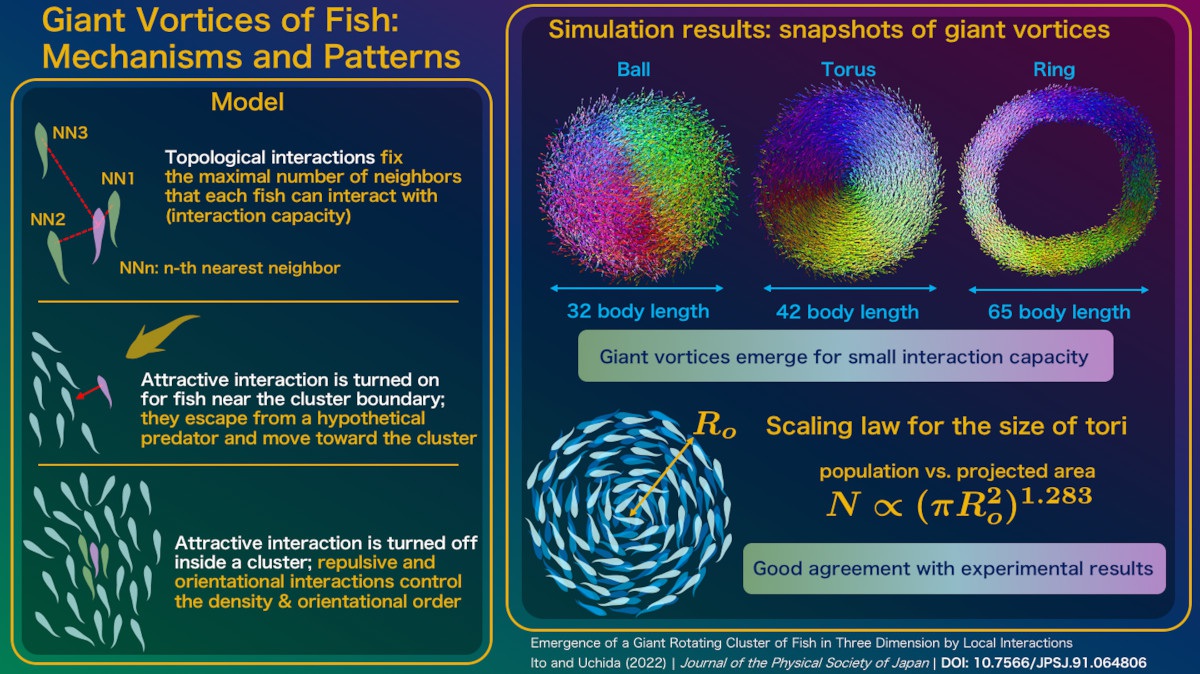 Fish schools form rotating balls, tori, and rings among other collective patterns.These vortex patterns are formed without inherent chirality of individual fish and are therefore considered as an example of spontaneous symmetry breaking due to interactions between self-propelling elements.

Origins of the vortex patterns are previously sought in potential-based attractive interactions, anisotropic interactions via a viewing angle, and/or long-range hydrodynamic interactions. However, several questions have remained on the formation of giant vortices consisting of tens of thousands of fish. For example, previous models require a large portion of fish in a school to interact with each other to form vortex patterns. However, in a high-density school of fish, visual and hydrodynamic interactions are screened, and thousands of fish simultaneously interacting with each other is unlikely. Furthermore, the dependence of the vortex size on the number of fish, which is known to obey a power law in schools of sardines and mackerels, has not been theoretically explained. Finally, three-dimensional rotating balls (known as "bait-balls") have not been reproduced in previous numerical studies.

In the present study, the above-mentioned problems are solved by a new model that incorporates the topological nature of interactions; fish are assumed to interact with up to a certain number of neighbors, which is called the interaction capacity. In addition, the attractive interactions are autonomously controlled such that they are turned on only when the fish has a small number of neighbors in the interaction range. This implies that fish near the cluster boundary are attracted by the cluster, which mimics the escape response characteristic to fish (“fast-start”). The model yields a rich phase diagram of collective patterns consisting of rotating balls, tori, rings, polarized schools, and randomly oriented swarms. The vortex patterns are obtained over a wide range of attraction strength when the interaction capacity is equal to or less than three. The projected area A of a torus scales with the number of fish N according to the power law N∝AV with the exponent ν = 1.283±0.004, which is close to the experimental value of 1.329. (Note that the values lie between 1 for a uniform disk and 3/2 for a uniform sphere.) Each fish in a torus exhibits random walk in the radial direction, instead of rigid-body rotation as predicted by non-topological models. These results indicate that the topological interactions enhance fluctuations in individual motion that trigger spontaneous breaking of the global rotational symmetry.

Cross-disciplinary physics and related areas of science and technology