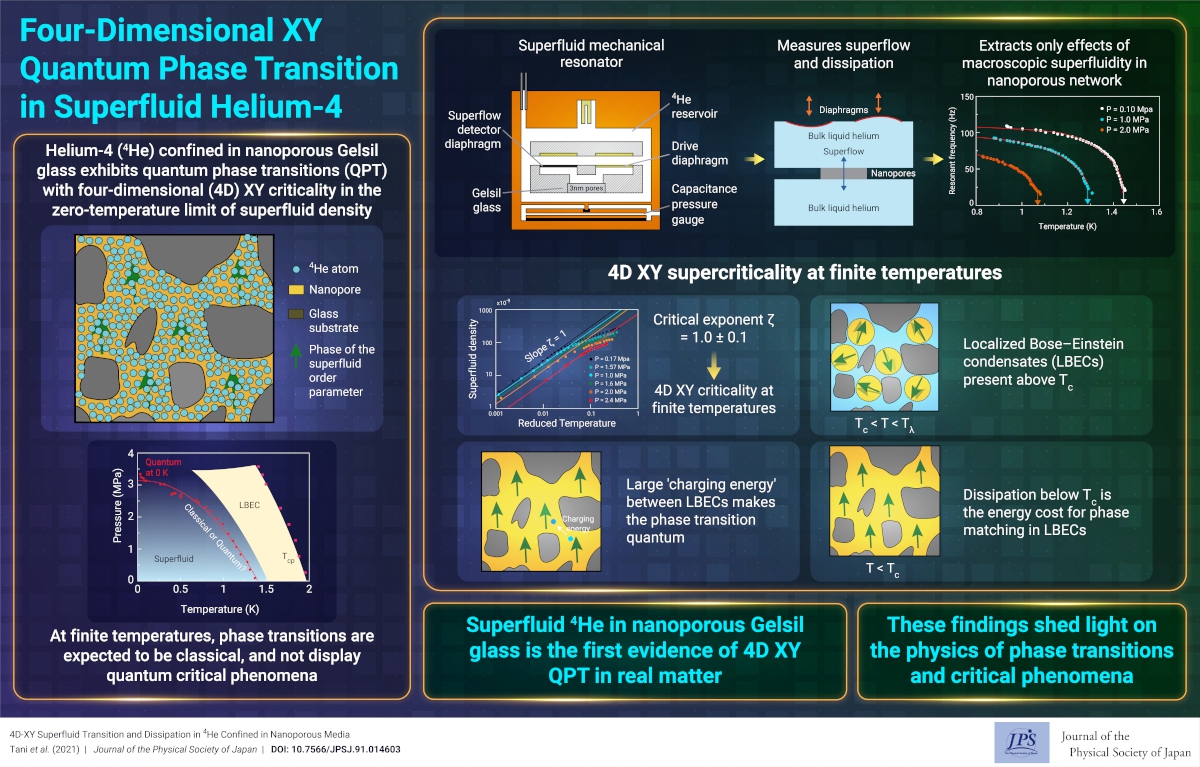 Phase transitions, such as the melting of ice, occur at finite (nonzero) temperatures as the result of thermal fluctuations, which cease as the matter is cooled to absolute zero (T = 0 K). However, even at 0 K, quantum fluctuations remain and cause another type of phase transition, called a quantum phase transition (QPT). QPT has been observed in many materials that are referred to as strongly correlated electron systems. Normally, QPT occurs only at 0 K and at a critical value of a parameter called the quantum critical point (QCP). At finite temperatures, the QCP is connected to the classical phase transition line. Therefore, QPT is believed to be unobserved at finite temperatures.

We discovered that liquid helium (4He) confined in a nanoporous material exhibits a superfluid transition governed by quantum fluctuations, even at finite temperatures. Ordinary liquid helium undergoes a phase transition from a normal viscous liquid to an extraordinary phase, called a superfluid. In the superfluid state, helium loses its viscosity, which is analogous to the zero-resistance state of superconducting electrons in metals. When liquid helium is placed into the nanopores of a porous glass called Gelsil, it exhibits a zero-temperature QPT, in which the superfluid state disappears at a certain critical pressure. However, the phase transition line in the pressure–temperature diagram exhibits a behavior that is explained by quantum criticality.

Therefore, in this work, to investigate the quantum effect at nonzero temperatures, we carefully studied the superfluid transition at many pressures using a newly developed superfluid resonator apparatus. The resonator consists of two bulk helium reservoirs separated by nanoporous glass filled with helium. When helium in the nanopores becomes a superfluid, the liquid flows between the reservoirs, resulting in a change in the resonance characteristics of the entire apparatus. We can precisely obtain the flow properties that are controlled by the superfluid density (quantity of helium atoms participating in the superfluidity) and dissipation (energy loss by nonsuperfluid components). We found that the superfluid density obeys a temperature–distance power law from the transition temperature, and the power, which is called the critical exponent, is 1.0, at all pressures measured. A critical exponent of 1 indicates that the superfluid critical phenomenon in the nanopores belongs to the four-dimensional (4D) XY universality class. This is decisive evidence for quantum criticality at finite temperatures. In ordinary bulk helium, the critical exponent is 0.67, indicating that the transition is three-dimensional.

Why is the superfluid transition of the nano-confined helium 4D? It has already been revealed that the QPT at 0 K exhibits 4D (equal to three spatial dimensions plus one imaginary time dimension) XY characteristics. At finite temperatures, superfluidity is caused by the frequent movement of helium atoms in nanopores. However, this motion was strongly suppressed at many narrow bottlenecks in the porous structure. This interruption of atom motion induces a quantum fluctuation in the superfluid order. As a result, the critical behavior changes from classical to quantum, that is, to that of a 4D XY class.

(Written by K. Shirahama on behalf of all authors)

Structure and mechanical and thermal properties in condensed matter