Reviews on the most recent advances in hydrogen science, including cutting-edge fundamental studies in condensed matter physics with hydrogen-containing materials. 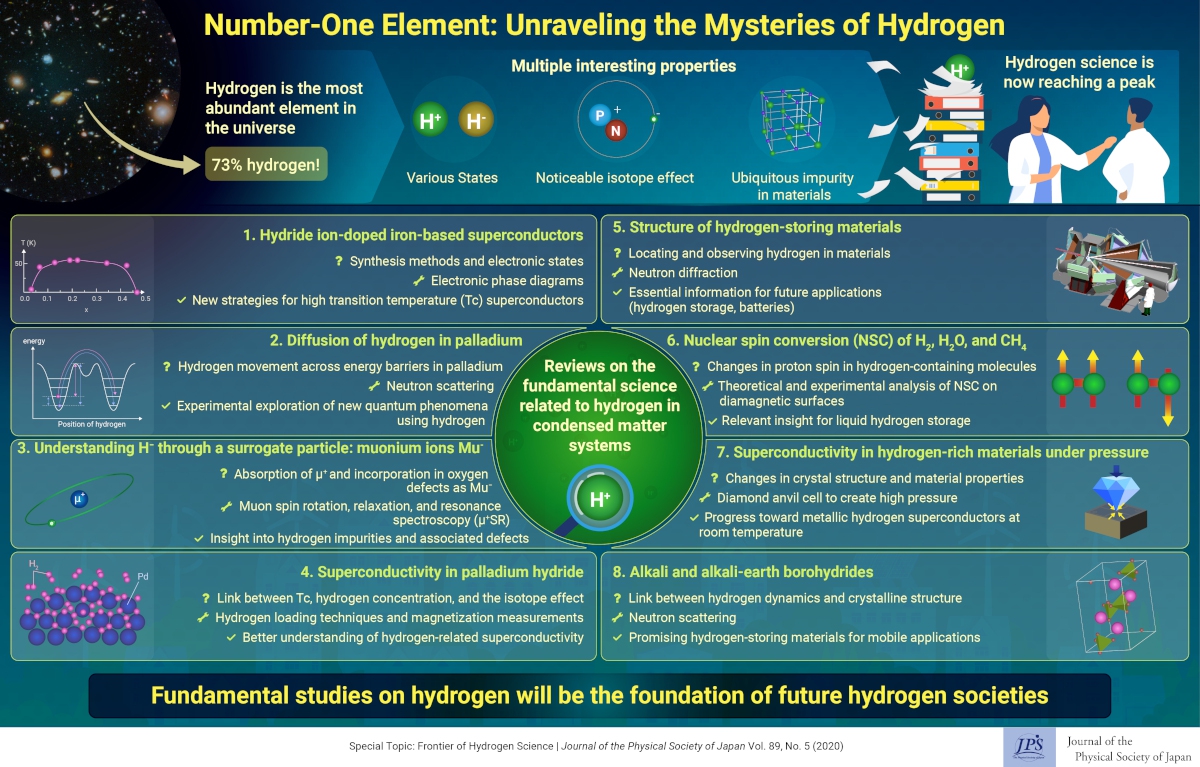 Hydrogen is by far the most abundant element in the universe, and despite being the smallest element, it has a variety of interesting properties, including multiple electronic states and a very noticeable isotope effect. Hydrogen is not only the most common impurity in materials, but also a key player in countless chemical reactions, relevant in the formation of stars and planets and in everyday life as well. Most importantly, hydrogen and hydrogen ions could find a home in a plethora of future applications, many of which are eco-friendly.

Given the importance of hydrogen science and the considerable progress made recently to understand the nature of this element, we have prepared a Special Topics section in this issue of the Journal of the Physical Society of Japan. In it, we included several review papers that cover both fundamental questions related to hydrogen behavior and applications involving hydrogen and hydrogen ions.

Some of today’s most outstanding feats involving hydrogen are in the field of superconductivity. Scientists working with hydrogen-containing materials have recently gotten much closer to superconductivity at room temperature. However, there is still much to understand about the role of hydrogen and hydrogen ions in these materials. Thus, three review papers focus on different aspects of superconductivity using various techniques and compounds.

The first discusses recent advances in iron-based superconductors doped with hydrogen ions, addressing existing synthesis methods and what is known about the electronic states of hydrogen in these materials. The authors explore the effect of hydrogen concentration and possible future strategies to realize iron-based superconductors at higher temperatures. The second focuses instead on the more fundamental aspects of superconductivity in palladium, a widely studied hydrogen-absorbing material. Different strategies to incorporate hydrogen into palladium are described, as well as magnetization measurements to get a better grasp on the link between hydrogen concentration, superconductivity, and the isotope effect. Finally, the third explores the growing field of research regarding superconductivity at high temperatures in materials under enormous pressure. In the future, it may be possible to literally compress hydrogen into a superconducting metal at room temperature.

Aside from phenomena surrounding superconductivity, hydrogen impurities in materials can have a variety of effects. However, hydride ions are difficult to directly observe, given their small size. In one review paper, the authors explore the use of a muonium ions, an exotic subatomic particle, to understand the behavior of hydride ions. Though muonium ions decay very rapidly, they can be precisely implanted and measured in a material to mimic isolated hydrogen impurities. This enables insights into how hydrogen impurities affect the host material’s structure. More specifically, the review focuses on the challenges and proposed solutions to effectively distinguish between negative and positive muoniums, both without unpaired electrons.

Hydrogen science is also an effective way to experimentally gain insights into quantum phenomena. One review paper covers the dynamics of hydrogen within palladium using neutron scattering to aid our understanding of how hydrogen jumps through energy barriers in the material, as well as how it settles at stable sites both in bulk and nanometer-sized palladium hydrides. Deeper insight into quantum effects may prove crucial in the design of future nanotechnology, and hydrogen could be our gateway to understanding and harnessing this power. Meanwhile, another review paper covers the use of neutron scattering and diffraction to pinpoint the location of hydrogen in crystalline compounds. In turn, this helps scientists elucidate the structure of hydrogen-containing materials, which is essential for future engineering applications such as hydrogen storage and batteries.

In addition, one review paper focuses on recent advances in alkali and alkali-earth borohydrides—hydrogen-storing materials that will be useful to power mobile devices. The authors go over existing neutron scattering techniques and how they can be used to determine the ways in which hydrogen affects the crystalline structure of these materials.

Finally, one last review paper addresses what’s known as ‘nuclear spin conversions’ in hydrogen-containing molecules, such as H2, H2O, and CH4. These conversions refer to changes in the spin of protons within these molecules. By explaining recent theoretical and experimental advances in this area, the authors promote research in this topic and present future strategies to better understand nuclear spin conversions both in large and small molecules, which could be useful to find safe and efficient ways of storing and transporting hydrogen.

There’s no doubt that understanding hydrogen better will help us uncover many mysteries of our universe while also bolstering the development of future technology. For our sake and that of the planet, let us hope scientists worldwide keep striving in these research areas and toward a sustainable hydrogen society.