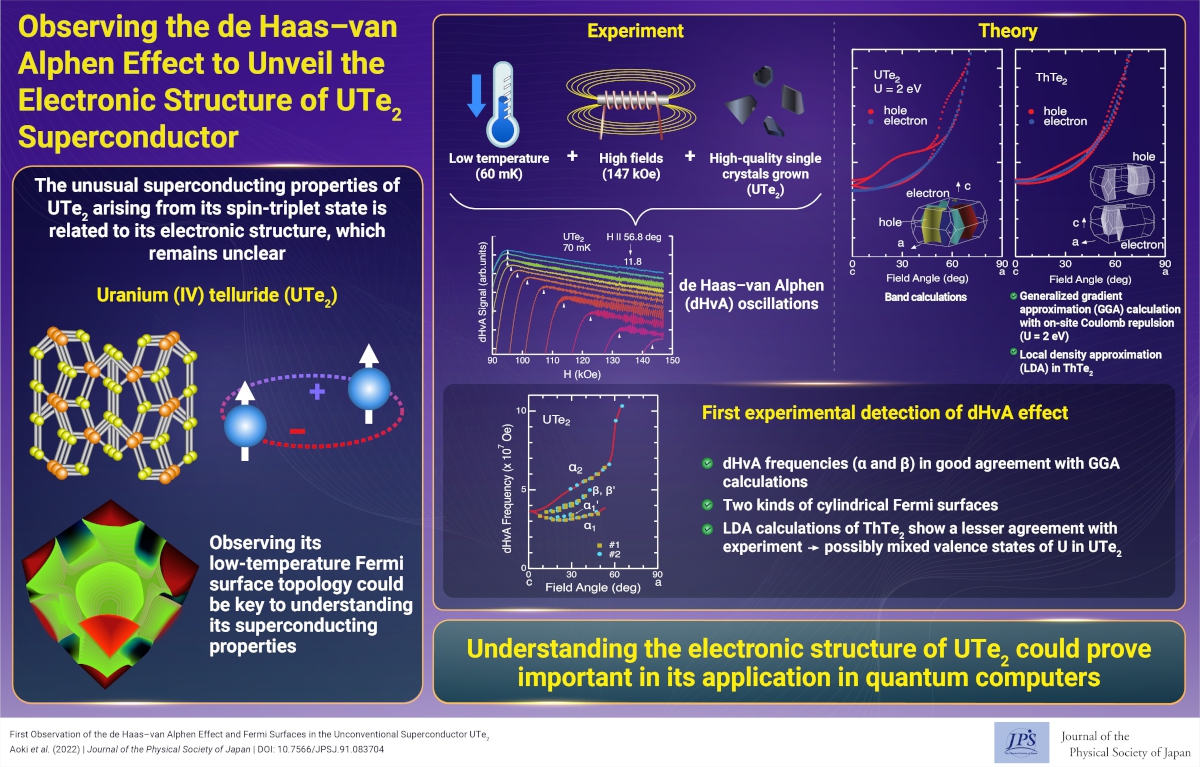 A powerful experimental probe is the quantum oscillation measurement method, such as the de Haas–van Alphen (dHvA) effect, which is the oscillatory effect in magnetization caused by the quantization of cyclotron motions in high magnetic fields. Three conditions must be satisfied to detect quantum oscillations: low temperature, high magnetic field, and high-quality single crystals. These are somewhat difficult experimental conditions. In particular, high-quality single crystals are inevitably crucial for UTe2 with strong electronic correlations.

In this study, we grew the ultrapure single crystals of UTe2 using “a new recipe” of a single crystal growth technique, as demonstrated by a high and sharp superconducting transition in specific heat measurements. Using this high-quality single crystal, we successfully detected quantum oscillations (the dHvA effect) for the first time in UTe2. By rotating the field directions, the topology of Fermi surfaces is precisely determined experimentally. The results are consistent with the band structure calculations, indicating the existence of two types of cylindrical Fermi surfaces from the hole and electron bands. The dHvA signals are detected only at extremely low temperatures below 0.12 K, revealing the heavy effective mass resulting from strong electronic correlations.

The bare band structure calculations based on the 5f-itinerant model predict a small bandgap at the Fermi energy level, indicating a Kondo insulator. This is inconsistent with the real system because UTe2 is a good metal with a large carrier number. To explain the experimental results obtained from the band calculations, we need to introduce the onsite Coulomb interaction, U. This suggests a possible mixed valence state of UTe2.

As Fermi surfaces, known as the “face of metal,” are essential information for the electronic states, our results are a good starting point for clarifying unusual phenomena in UTe2 and other unconventional superconductors.

(Written by D. Aoki on behalf of all the authors.)