Red blood cells flowing through square capillary tubes were observed to migrate towards four points located on the diagonal in the tube cross-section, owing to their deformability and inertia. 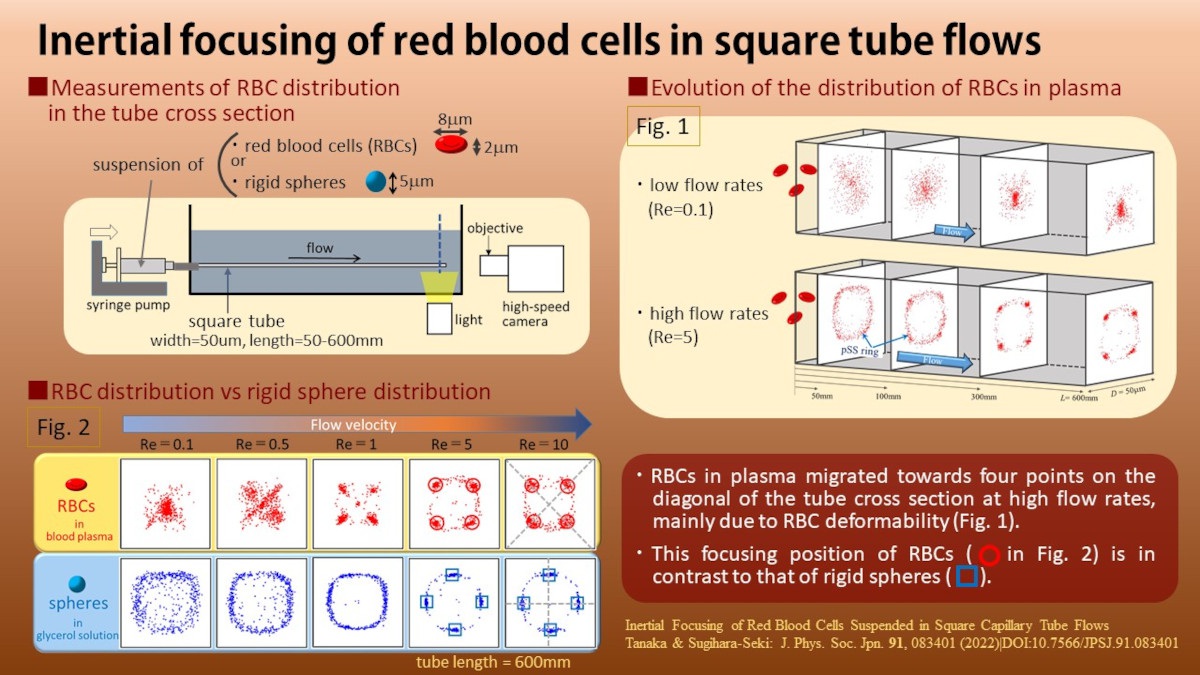 Particles suspended in laminar flows through uniform, straight tubes are expected to move parallel to the tube axis. However, in experiments, particles migrate across streamlines due to the lifts induced by inertia, particle deformability, medium elasticity and so on. As a result, they pass through specific locations in the downstream cross-section. The presence of inertial lift was first reported concerning circular tube flows, where spherical particles suspended in a Newtonian fluid migrated towards an annulus located at approximately 0.6 times the tube radius from the tube centerline, named “inertial focusing”. In rectangular tube flows typically adopted in microfluidics, particles migrate towards several discrete points in the downstream cross-section. Particularly concerning square tube flows, spherical particles suspended in Newtonian fluids become concentrated at four points near the center of the side walls.

Recently, inertial focusing phenomena have gained considerable attention in the field of microfluidics owing to their promising application in separating and filtering biological cells. This flow-based separating technique using microfluidic devices is based on differences in the inertial focusing behavior of cells, depending on their size and deformability. Although biological cells are somewhat deformable, and suspending media usually contain various polymers, it is unclear how cell deformability and medium elasticity affect inertial focusing.

This study experimentally investigated the inertial focusing of red blood cells (RBCs) when suspended in blood plasma flowing through square cross-section capillary tubes. RBCs are known to be highly deformable, and the plasma contains various polymers (approximately 8% by volume). The face-on image of the tube cross-section near the outlet was taken from the downstream side using a high-speed camera, enabling accurate positions of RBC centroids in the cross-section to be obtained. At low flow rates, RBCs were observed to accumulate near the tube centerline, whereas increasing the flow rates caused RBCs to focus near four points located on the diagonal of the downstream cross-section. This focusing behavior significantly contrasts with that of the comparably sized rigid particles. Additional experiments using glutaraldehyde-hardened RBCs confirmed that the RBC focusing on the diagonal is primarily attributed to RBC deformability. A slight contribution of plasma elasticity was also suggested by the difference between the distributions of spherical particles suspended in plasma and those in Newtonian fluids. Based on the experimental results, the properties of deformability- and elasticity-induced lifts were discussed.

（written by M. Sugihara-Seki on behalf of all authors.）