State-of-the-art magnetostriction measurements in a pulsed-magnetic field reveal the origin of a metamagnetic transition of spin-triplet superconductor UTe2. We propose that the uranium valence fluctuation plays a crucial role in its metamagnetic and superconducting transitions. 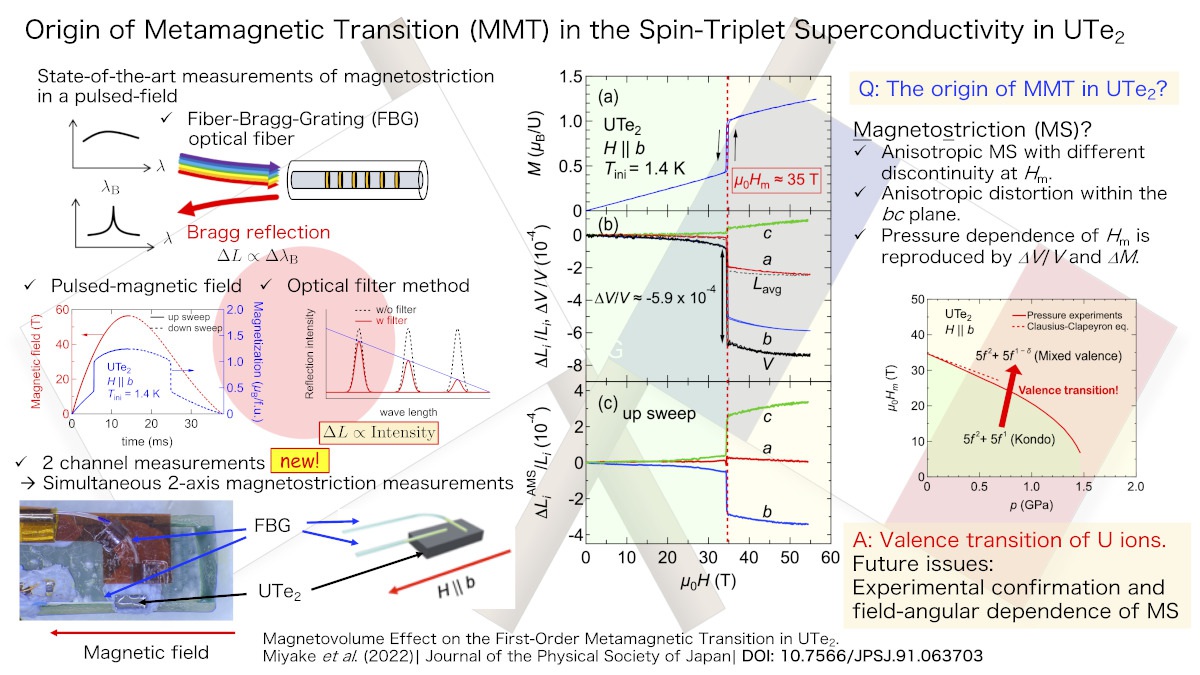 The metamagnetism realized in heavy fermion systems has been well studied to date. At the metamagnetic transition/crossover fields, magnetization increases discontinuously/non-lineally, and fluctuations develop. Consequently, the effective mass increases. Thus, the metamagnetism may induce a new quantum state, such as a superconducting transition. The uranium-based ferromagnetic superconductors have been good playgrounds to study the relationship between metamagnetism and superconductivity. Quite recently, another related system, UTe2, was discovered.

The superconductivity in a paramagnetic heavy fermion system, UTe2, became a hot topic in condensed matter physics community since the realization of the spin-triplet state, which is expected for use in quantum computing. The external stimuli, such as pressure, magnetic field, and its applied direction, make UTe2 more attractive. The most remarkable feature is the magnetic-field-direction controlled superconductivity. For H || b axis, superconductivity is reinforced by increasing the fields but is killed at the metamagnetic field Hm ~ 35 T, where a first-order metamagnetic transition takes place. However, the field applied near the orthorhombic [011] direction induces another superconducting phase above Hm. Because experimental probes usable under such extreme conditions were limited, the role of metamagnetic transition in the appearance/disappearance of superconductivity is far from complete understanding. Moreover, the metamagnetism in UTe2 must be more clarified. These still remain a big challenge for experimentalists.

Across Hm approaching from the lower fields, the volume shrinks discontinuously. This volume discontinuity well explains the pressure dependence of Hm and magnetic susceptibility reported earlier. Furthermore, we revealed that the metamagnetic transition in UTe2 involves anisotropic lattice deformation. Considering the localized and itinerant duality nature of uranium ions, we proposed that the uranium valence transition is the origin of metamagnetism. We also discussed the singular behavior in UTe2 by comparing it with the other heavy fermion systems. Our findings deepen the understanding of the fascinated physics realized in UTe2.

(Written by A. Miyake on behalf of all authors)