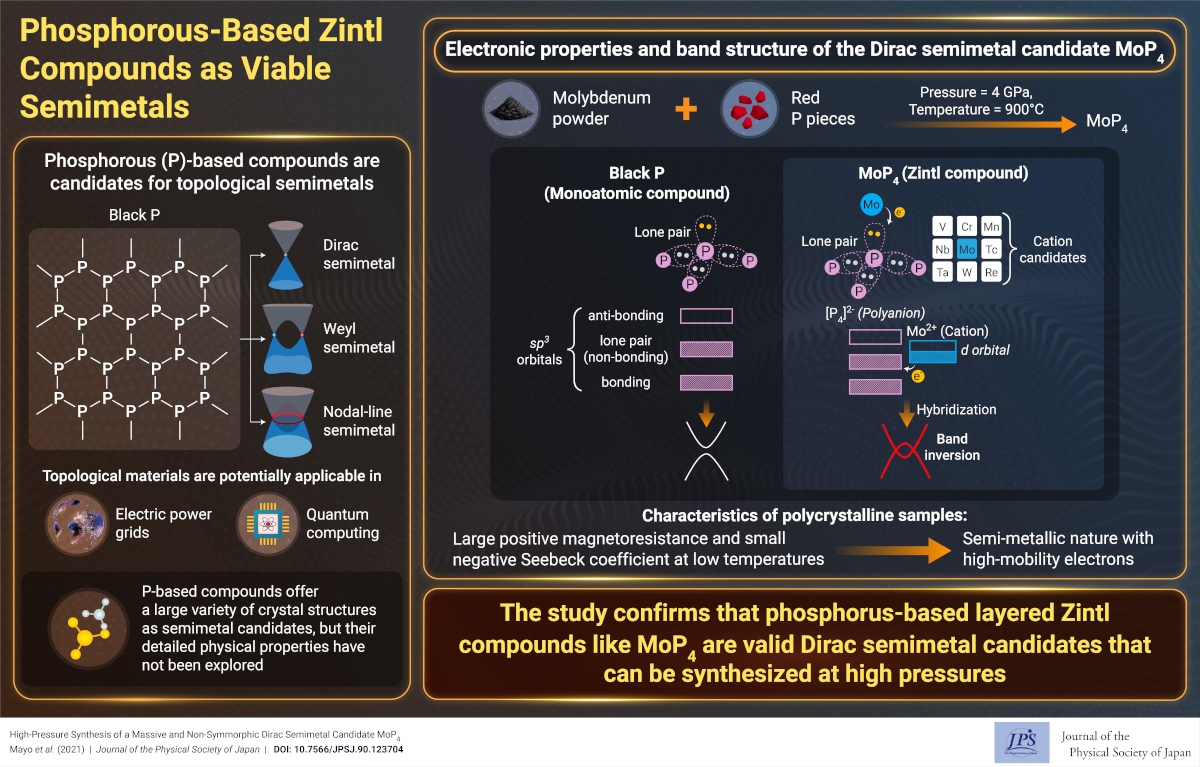 Topological materials, which have non-trivial geometrical properties in their band structures, have attracted attention owing to their exotic quantum transport phenomena and applications to ultrafast and low-power-consumption devices. Dirac electron systems, such as graphene, are a typical example. To exploit the quantum properties inherent in Dirac electronic materials and to advance their functionality, a system that facilitates chemical band engineering is desirable. However, the relationship between the momentum-space topological band structure and the real-space crystal structure is generally not self-evident, and an ideal system to explore such a relationship has yet to be reported.

To realize topological semimetal states, band inversion between the valence and conduction bands is required. To realize such band structures, the authors focused on phosphorus-based Zintl compounds. Zintl compounds are materials consisting of nonmetallic elements. They form covalent polyanion clusters, and metal cations; hence, the crystals have an intermediate character between ionic and covalent crystals. The key feature is that the octet rule is satisfied in the polyanion clusters by receiving electrons from the metal cations and forming lone electron pairs, thereby tending to yield semiconducting or semi-metallic electronic structures.

The authors have successfully performed high-pressure synthesis of single-crystal and polycrystalline MoP4, a Zintl compound with a layered structure derived from black phosphorus, and they found that this system is a promising platform for exploring new topological semimetals. In the high-quality polycrystalline sample, a non-quadratic large positive magnetoresistance was observed at low temperatures, and a sign change from positive to negative in the Seebeck coefficient was observed with decreasing temperature, suggesting that MoP4 is a semimetal with high mobility electron carriers. First principles calculations using refined single-crystal structure parameters revealed that a Dirac-semimetal-like band dispersion consisting of Mo-4d and phosphorus-3p orbitals is realized near the Fermi level and is responsible for the high mobility electron carriers.

This presents a general case that the topological electronic structure can be generated and controlled on a real-space basis through hybridization of the valence orbital of the metal cation inserted between the phosphorus polyanion layers and the p-orbital of phosphorus. Because MP4 can encapsulate various transition metal ions other than Mo2+, such as Cr2+ and W2+, the design and development of phosphorus-based Dirac materials with various functions optimized via chemical substitution are expected to advance in the future.

Material design focusing on black phosphorus, a well-known high mobility semiconductor and Dirac semimetal candidate, is expected to be a promising guideline for the strategic development of topological materials based on structure-function relationships.

(Written by A. H. Mayo on behalf of all authors)