We theoretically show that the nodal structures in topological semimetals, including Weyl points and nodal lines, can be switched by magnetic orders, accompanied by localized states at magnetic domain walls. 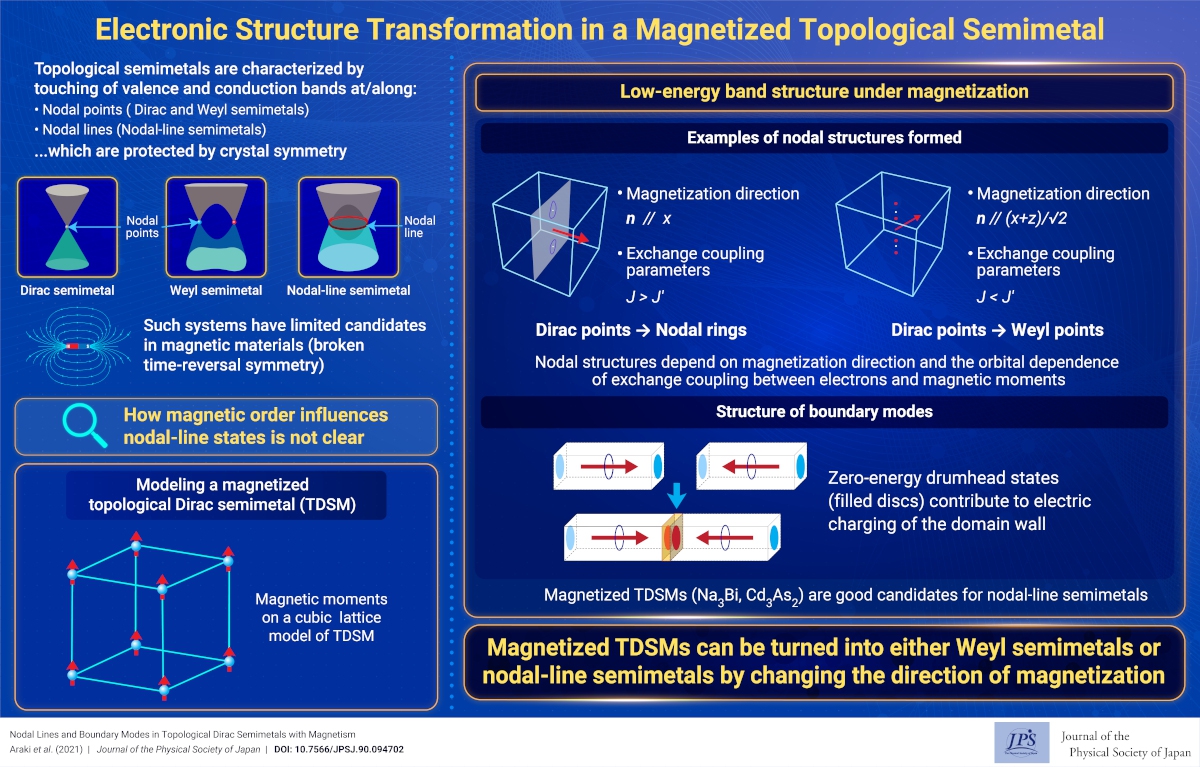 Topological semimetals are materials distinct from conventional metals and insulators and are characterized by the touching of valence and conduction bands in momentum space, which occurs at discrete point nodes (Dirac and Weyl points) or closed loops (nodal lines), which emerge robustly against disorder. There has been a growing interest in such topological semimetals owing to unconventional electron transport phenomena (e.g., the anomalous Hall effect (AHE) and the spin Hall effect) arising from band topology.

Recently, topological semimetals having ferromagnetic or antiferromagnetic orders have been theoretically predicted and experimentally synthesized. Numerous theoretical and experimental studies have considered the effect of magnetism on Weyl points, whereas the idea of magnetic nodal lines is still limited. We hence need to understand how the nodal structures, especially nodal lines, and the consequent electronic properties are related to magnetic orders. Understanding such magnetic topological semimetals would also be useful for spintronics applications to realize the efficient control of electron transport in nanoscale structures and devices via magnetism.

In this study, we theoretically investigate the characteristics of nodal structures including nodal lines in magnetic topological semimetals by using a topological Dirac semimetal (TDSM)-based model. While a nonmagnetic TDSM has a pair of Dirac points with twofold spin degeneracy (up/down), we demonstrate that a ferromagnetic order introduced in this system breaks the degeneracy and converts the Dirac points into either Weyl points or nodal lines, depending on the direction of magnetization. This behavior may enable efficient switching of electron transport related to the nodal structures, such as the AHE, by controlling the magnetization, which may be applicable for low-current magnetic sensors.

In addition to the electronic structure in the bulk, we observe that magnetic nodal lines give rise to a characteristic feature at magnetic domain walls. Flat-band states with zero energy (“drumhead” states) emerge at localized regions on the domain wall. These states have band structures similar to the drumhead surface states in nonmagnetic nodal-line semimetals. The drumhead states found here contribute to electric charging of the magnetic domain walls, which facilitates the efficient manipulation of magnetic domains using electric fields and may be useful for magnetic memories and neuromorphic computing devices.

Our work highlights a close correspondence among the magnetic order, nodal structure in the bulk, and boundary modes at magnetic domain walls. Our theoretical proposals may be experimentally verified by adding magnetic dopants or constructing magnetic heterostructures with TDSM materials (e.g., Cd3As2).

(Written by Yasufumi Araki on behalf of all authors)

Electronic structure and electrical properties of surfaces and nanostructures