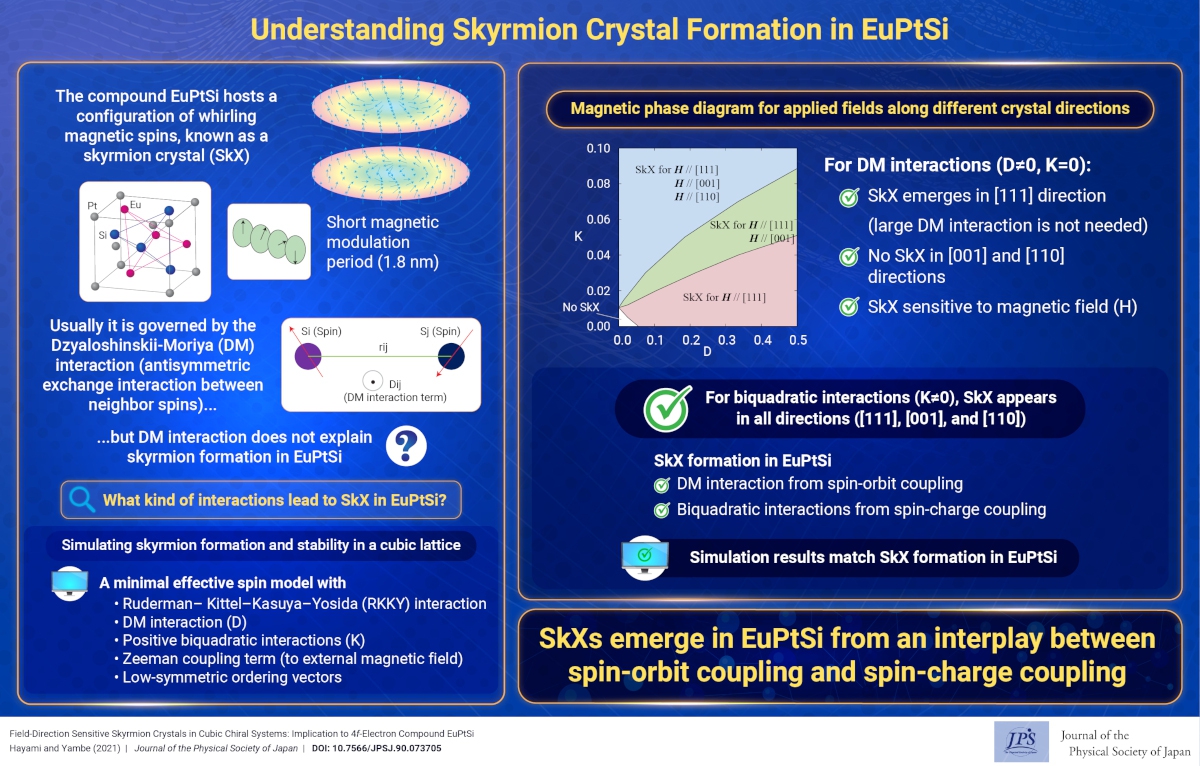 Magnetic skyrmions with swirling topological spin textures are of significant interest owing to their peculiar magnetic, transport, and optical properties. In magnetic materials, skyrmions usually appear in a periodically ordered state, which is referred to as the skyrmion crystal (SkX). The SkX can be considered as a multiple-q order described by the superposition of multiple spiral waves. The SkX was originally discovered in 2009 in d-electron compounds like MnSi, where the Dzyaloshinskii–Moriya interaction plays an important role. Recently, SkXs have been observed in centrosymmetric magnets via other mechanisms, such as frustrated exchange interactions and/or multiple-spin interactions in itinerant magnets. The resulting difference due to the individual origins appears in the magnetic modulation period of the SkXs, with the original mechanism usually leading to much longer magnetic periods than those of the latter ones. Specifically, a small skyrmion induces a large emergent magnetic field, and hence engineering small skyrmions is relevant for future spintronics applications, as they may potentially aid in realizing energy-efficient devices based on high density topological objects.

The itinerant chiral antiferromagnet EuPtSi is the first f-electron compound with a noncentrosymmetric lattice structure found to host a SkX with a small magnetic period. The origin of the SkX in EuPtSi is not explained by the conventional mechanism based on the Dzyaloshinskii–Moriya interaction, as the magnetic periods and the magnetic-field-direction dependencies of the SkXs are different from those found in other noncentrosymmetric magnets. Therefore, we need to consider other mechanisms that have not yet been theoretically clarified. Understanding the origin of short-period SkXs in noncentrosymmetric itinerant magnets found in EuPtSi is crucial in enabling small skyrmion engineering for practical applications.

In this study, we theoretically investigated the origin of SkXs in f-electron compounds by constructing a new model based on EuPtSi. We discovered the following two important elements in inducing a field-direction sensitive SkX with a small magnetic period: (1) the multiple-q superpositions of the spirals with low-symmetric ordering vectors and (2) the synergy between the long-range Dzyaloshinskii–Moriya interaction arising from the spin-orbit coupling and the biquadratic interaction arising from the spin-charge coupling in itinerant magnets. We demonstrated that the theoretical model which satisfies the two conditions accurately describes the SkX physics in EuPtSi through unbiased annealing simulations. Our study provides a reference for both engineering short-period SkXs and for exploring further skyrmion-hosting materials in noncentrosymmetric itinerant magnets.

(Written by Satoru Hayami on behalf of all authors.)