Under Pressure: Getting the Electronic State of Europium Ions to Changes

Scientists show how pressure and quantum phenomena interplay to alter Europium’s electronic states in a unique manner, opening doors to novel applications in spintronics and technology.

The exploration of unusual phenomena in solid-state physics is one of the best ways of gaining meaningful insights for designing new functional materials. In general, solids exhibit exotic properties when they are pushed from one state into another; that is, during a transition. Understanding the causes and effects of transitions furthers our knowledge of physics and helps us adjust our models.

In our recent study, invited as a review paper published in the Journal of the Physical Society of Japan, we delve deep into compounds containing europium (Eu). Ions of this peculiar element are usually divalent (Eu2+), unlike other rare-earth metals, which are usually trivalent (Eu+3). However, in europium, the energy difference between these electronic states is so small that a transition can be forced by simply applying pressure on Eu-containing crystals. The study of these transitions, and the intermediate states, allows us to determine the causes underlying changes in the material’s electromagnetic properties. Therefore, we prepared over 20 different Eu-based compounds and analyzed the varied effects of pressure on the electronic state of Eu ions.

What’s interesting about the various Eu compounds we tested is that we can make use of recent technological advances to generate pressures so high that transitions from the Eu2+ state to the Eu3+ state are forced. We found, however, that these transitions are far from uniform across the materials we produced. Some compounds, such as Eu2Ni3Ge5 and EuPt2Si2, show a gradual transition with increasing pressure. At a certain critical pressure, these materials exhibit the intermediate state with heavy electrons. Meanwhile, the compound EuRh2Si2 shows an abrupt transition from one state to the other, in a process known as ‘first-order transition.’ 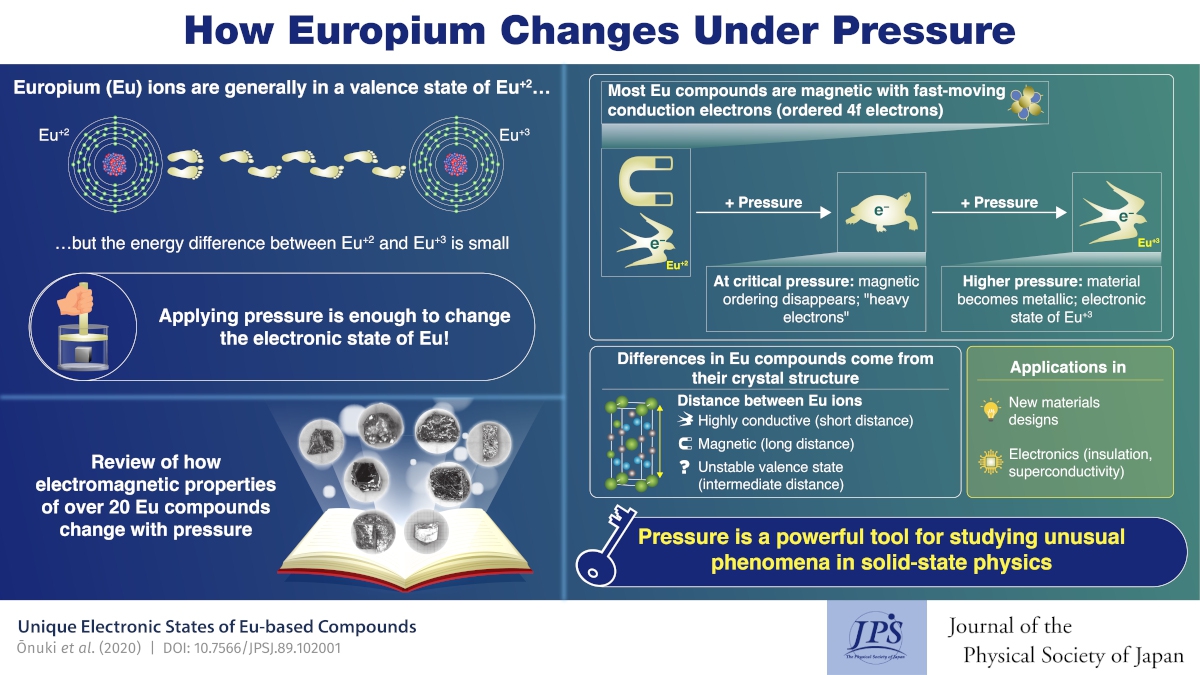 Through our experiments and theoretical analyses, we clarified the mechanisms behind the electronic states of the Eu compounds and the different causes of valence instability, which include competing quantum phenomena and pressure–temperature interplay. We proved that the heavy-electron state in many Eu compounds is a consequence of the Kondo effect, which describes what happens to the flow of conduction electrons in the presence of magnetic impurities (in this case, a crystalline Eu lattice with periodic magnetic domains). Moreover, we found that another phenomenon, called Ruderman–Kittel–Kasuya–Yosida (RKKY) interaction, competes with the Kondo effect. In the context of our study, the RKKY phenomenon involves the coupling of spins of 4f electrons through interactions mediated by conduction electrons. Interestingly, we observed that the competition between the Kondo effect and the RKKY interaction dictates many of the electronic state transitions in Eu compounds.

Another remarkable finding in our study was that EuPtSi forms a skyrmion lattice—a particular arrangement of magnetic spins in the shape of a vortex. The stable magnetic ordering within skyrmions gives rise to interesting material properties that could be exploited for all sorts of devices, from logic gates to the smallest non-volatile memory units. The manipulation of skyrmions will be a key factor in the advancement of spintronics, and thus our finding of the first skyrmion lattice in a rare-earth metal should be interesting to scientists in this field.

Overall, our study not only serves to characterize the unique and varied properties of Eu compounds, but also showcases how pressure can be a very practical tool for squeezing out secrets from the material world. In addition, we envision novel electronic devices that make use of the either gradual or abrupt transitions between electronic states in Eu compounds.

The insights gathered from our experiments reveal a path to exploring new functionalities in Eu-based metals and open up novel possibilities in materials design.